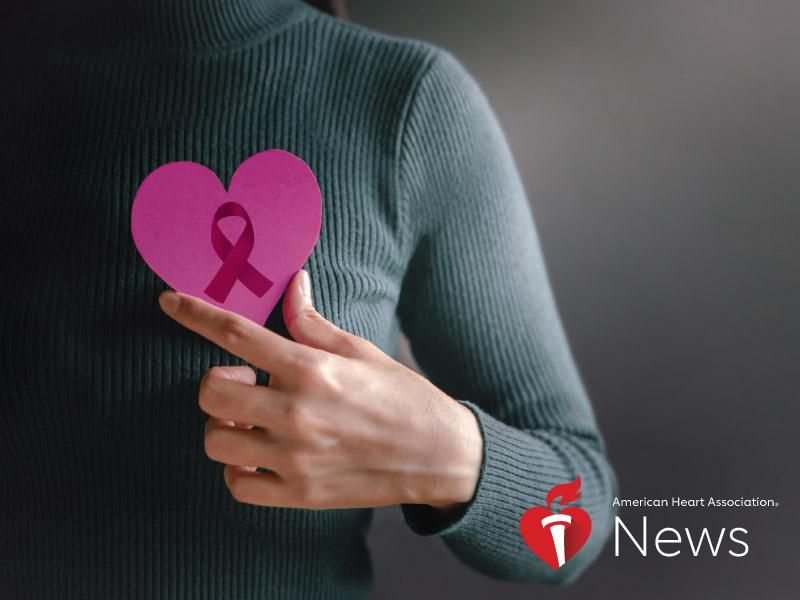 Women who develop heart failure following certain breast cancer treatments are generally healthier and have a better prognosis than those with heart failure from other causes, a new study finds.

Two widely used treatments for breast cancer are known to harm the heart. A class of chemotherapy drugs called anthracyclines interferes with cancer cells’ DNA and ability to multiply. The monoclonal antibody trastuzumab blocks the protein that allows HER2-postive breast cancer to spread aggressively. It often is prescribed with chemotherapy. Roughly 1 in 5 breast cancer cases are HER2-positive.

Many doctors and patients assume heart failure after breast cancer treatment is like any other case, without looking closely at the nature of the disease, said Dr. Husam Abdel-Qadir, a cardiologist at Women’s College Hospital at the University of Toronto.

“There was an unspoken assumption that this is just like heart failure from other causes, such as after a heart attack, in which the prognosis can be quite bad – even though we did not have any data for it,” he said. “So, we tried to fill that gap.”

The researchers analyzed data between 2007 and 2017 of people in Ontario, Canada, where universal health care is available to all residents. They compared two groups of women with heart failure. Those who had been treated for early-stage breast cancer were less likely to have other health problems, such as atrial fibrillation, high blood pressure or diabetes, compared to a control group without a history of cancer.

Also, the women treated for breast cancer were less likely than those without it to be hospitalized or visit the emergency room for their heart failure over an eight-year period.

Women in the cancer group also were less likely to die of cardiovascular causes during a median follow-up of three and a half years – 2.2% died from cardiovascular disease compared to 5.1% in the control group.

Up to 4% of people taking trastuzumab with chemotherapy may experience heart failure, according to a 2018 report about cardiovascular disease and breast cancer from the American Heart Association – although Dent, who co-authored the report, said higher rates have been reported in various studies. The risk of heart failure from anthracyclines depends on the cumulative dose received, with lower doses associated with a 5% risk of heart failure.

“The risk of dying of cancer is probably still much higher if patients do not get appropriate cancer treatment, compared to the risk of them dying of cardiovascular disease,” said Dent, who was not involved with the new study.

“As oncologists, it’s important for us to ensure our patients get the best possible cancer treatment while mitigating the risk of adverse side effects, including heart failure,” she said. And although the study showed breast cancer survivors who developed heart failure had better outcomes than expected, “our goal should always be to offer the best possible cancer care without adversely impacting the heart.”


A lump in the breast is almost always cancer.
See Answer

Women being treated for breast cancer who are concerned about their heart health can work with specialists to lower the risk of harm, Dent said. “That should always be a discussion between the patient, the oncologist and the cardiologist: to maximize the cancer therapy while also minimizing the risk of cardiovascular injury.”

Could Traffic Noise Raise Your Odds for Dementia?…

Postponing This May Keep Dementia at Bay…